The Buffet is Open!

We had experienced many new concepts since leaving city life behind and moving out west. Conversations now focused on matters that I never thought would cross my lips—horses, cows, horseshoes, supplements, small farm animals, and wild animals. Weather also was a big topic, as well as how to protect yourself and your homestead from it. We learned about growing fruits and vegetables and, of course, we experimented with various means of dealing with the dreaded varmints, especially the chipmunks and squirrels who regularly threatened them.

The wildlife that lived on my place loved me. Each time they saw a new plant in the yard or in a pot, they assumed the buffet line was open. Deer, chipmunks, squirrels, and rabbits relished every flower I set out. It was so frustrating. They should have been satisfied with the bird seed they raided out of the feeder every day, but no, they were glutinous to a fault.

One particular chipmunk, a rather industrious fellow, climbed inside the long plastic tube of the bird feeder, and ate so much seed, he became too fat to climb out again. I discovered his plight when I went to refill the feeder and saw one eye smashed against the plastic cylinder, blinking at me. I was so startled I nearly dropped the feeder on the ground. I shook it vigorously upside down, trying to get him out, but he barely budged. Kobi, our dog, stood by, anxiously licking his chops in anticipation. I removed the top from the feeder and gave it one last huge fling. A furry torpedo flew past the dog and plopped to the ground, rolling. As soon as he stopped rolling, he righted himself and scurried to the shelter of a nearby tree. He was too fat to run very fast, and though Kobi pursued him, he managed to dodge safely about and made good his escape. I thought that was the end of it until a few days later I found him again stuck in the feeder. Apparently, he had to lose some weight before he was thin enough to climb back into the tube. Some chipmunks never learn.

I just had to take a few minutes and draw this little fellow! 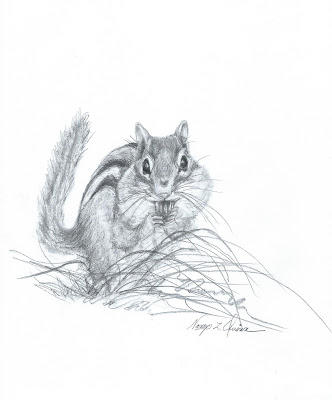 Enjoy more stories like this in my book, Go West, Young Woman!

Visit my new website for my book, https://nancy442.wixsite.com/quinn
Feel welcome to look at my wildlife art at  http://quinnwildlifeart.com/ 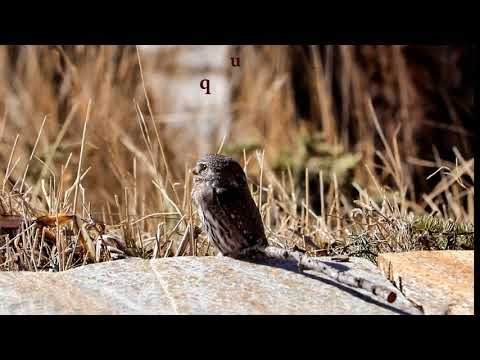 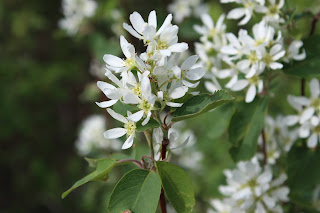