When I left Washington D.C, I thought traffic jams were a thing of the past.  I thought my days of dodging cars and pedestrians were over.  Never again would I get stuck behind some obstacle to my destination.  Can a country road be just as frustrating as a six lane highway?  Perhaps not as frustrating, but close.

One sunny day I was driving down my road, when I saw a herd of elk in the lower pasture.  They looked up in alarm when they saw my vehicle, and began to run up the hill towards the road I was driving on.  One would think they would run in the opposite direction of what caused them such a fright, but no, they came blindly running across the road in front of my car, while in a desperate effort to avoid me!

Part of my road crosses a neighbor's grazing fields. After my narrow escape of being trampled by elk, I encountered cows napping in the road, blocking my progress.  After much horn blowing and inching forward, some of them moved over to the edge of the road.  One particularly terrified cow continued to run in front of me, looking back every few seconds to see if I was still there.  Oh no! that thing is still after me, I have to run faster, faster!  her face said it all.  After a minute or so, it finally occurred to her, to just run down the hill out of my path, where she finally stopped.  With heaving sides from being out of breath, she relayed her narrow escape to all her friends. I saw them, clustered in a group, as they offered her comfort. 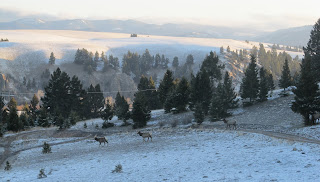 Welcome to a Western Life

This is my debut post about our life on a Montana Mountain. I am Nancy Quinn, a wildlife artist and new author. I live on a mountainside in with my husband, daughters, dogs, and horses, where I paint and write about my experiences living in the wild. I have always had interesting stories to tell about my encounters with wild animals. Upon leaving our urban lifestyle in Washington, DC, to live in rural Montana, the popularity of my stories grew, and led me to write my first book "Go West, Young Woman!"

Living a rural lifestyle is not for the faint of heart, but it can make for some really funny and exciting experiences. I hope to hear from all of you who are interested in rural life. 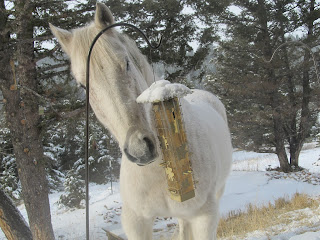 My new paperbacks arrived and I wanted to share this exciting moment with you all. These are the copies I will be signing and sending to ... 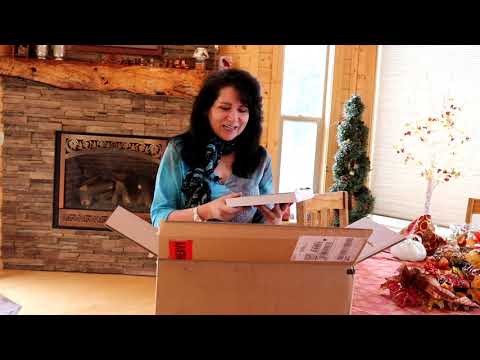